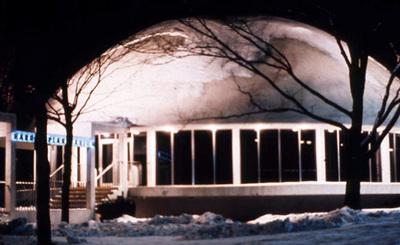 Namesake:
The planetarium was named for Hardin Cherry Thompson [1938-1963], son of President Kelly Thompson who died during his senior year at Western. Thompson, an Industrial Arts major, was active in the Arts and Craft Club, Scabbard and Blade, the Pershing Rifles and served as a College Heights Herald reporter.

There is a commemorative bronze plaque measuring 17" x 17" with inscription:

Named by the Board of Regents in Honor of Hardin Cherry Thompson, a member of the Western Senior Class at the time of his death, October 5, 1963. His courage and patience during extended illness brought inspiration to his fellow students and to all who knew him. This plaque presented by senior class of 1968.

History:
Dedicated on October 13, 1967, the planetarium is seventy-two feet in diameter and 44 feet high, seats approximately 200 spectators in upholstered seats arranged in concentric circles with radical aisles. It contains a projection hemisphere room, display galleries and offices.["Planetarium One of Nine Western Structures Set for Dedication," Oct. 5, 1967]. The building was dedicated on Oct. 14, 1967.

"Planetarium One of Nine Western Structures Set for Dedication," Oct. 5, 1967.