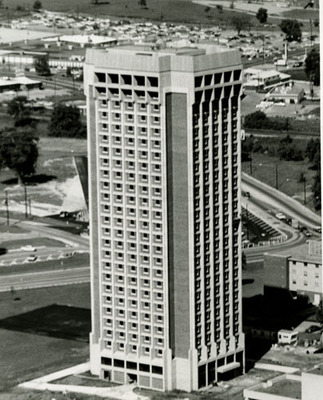 Namesakes:
William Pearce served as Ogden College president from 1913 to 1920 when he resigned to become the director of WKU's Department of Extension and Correspondence. He held this position until his retirement in 1959. Pearce was WKU president Kelly Thompson's father-in-law.

M.C. Ford (1888-1940) attended Hartford College before enrolling in Western in 1909. He joined the faculty at WKU in 1913, teaching science and agriculture and becoming the chair of Agriculture and Natural Sciences. Ford obtained his PhD from the University of Wisconsin and served Western until his untimely death in 1940.

History:
The 27 story men's dormitory opened in the fall of 1970 and accommodated 920 residents. At the time, it was the tallest building in Southern Kentucky at 246 feet, 7 inches. Pearce-Ford Tower is 180,400 square feet and has apartments for a dorm director and two assistants. During 1993-94 the first ten floors were reopened before renovations were completed due to an unexpected increase in the number of incoming freshman.

2008 - creation of Learning and Living Communities

It is now under construction near the South end of the Western campus by Allen and O’Hara Inc. of Memphis, Tenn. The $4.3 million air-conditioned structure will contain 180,400 square feet of enclosed space and accommodations for 920 men students. Apartments for dorm directors, study lounges, a lobby, and other facilities are also included.

W.M. Pearce served as Director of the Department of Extension and Correspondence at Western from 1920 until he retired in 1959. He also served as advisor and unofficial aid to two Western presidents, Dr. H.H. Cherry and Dr. Paul L. Garrett.

Dr. M.C. Ford was a member of the Western faculty from 1913 until 1940. He was head of the Department of Agriculture for his last 22 years at Western. He also acted as advisor to Dr. Cherry and Dr. Garrett.