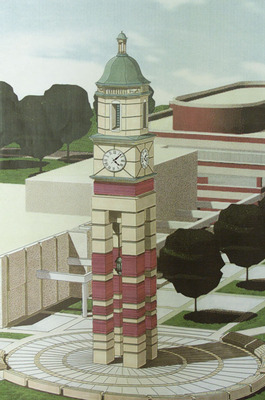 Namesake - Sgt. 1st Class Robert Guthrie who was killed in the Kroean War.

The Guthrie Tower/Plaza which includes a clock and bell tower was made possible by a gift from the Lowell Guthrie family and Trace Die Cast, Inc.

The top of the bell tower is modeled after Cherry Hall, featuring a replica of the cupola, which architecturally unites the north and south ends of campus. It has clock faces on all four sides.

The tower has a 47-bell (4 ½ octave) carillon that weighs about 25,000 pounds. The base bells were purchased from the van Bergen Company in Charleston, SC. The largest bell is 59 inches in diameter and weighs 4630 pounds. The bells sound the traditional Westminster chimes melody.

The ideology behind the clock tower and plaza is for students, faculty, alumni and friends of Western Kentucky University to celebrate the freedom we share as American citizens. The tower and plaza will serve as a tribute to the men and women who sacrificed their lives to make that possible.

The granite benches surrounding the tower include quotations from several historical figures and include:

"America's strength is its diverse people, just institutions, shared values, and deep and abiding faith in God. No terrorist attack will ever extinguish the flames of freedom and democracy." - U.S. Senator Mitch McConnell, 9/11/2001.