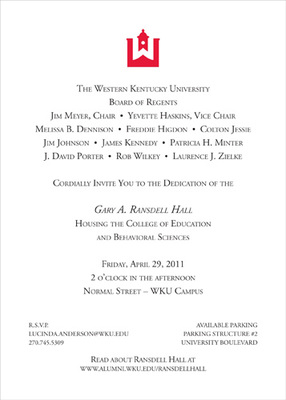 Building History:
In late February 2008, the Alpha Delta Pi sorority house was demolished, along with eight other properties on Normal Drive and Regents Avenue, to provide room for the College of Education Building. Construction would begin in the summer of 2008, as designing was still in process. On April 17th, 2008, the project was LEED certified; at the same time, it was announced that construction would begin in the fall of that same year and end in the fall of 2008, though the start date was later changed to August.

According to Bryan Russell of Capital Construction, work on the building would be completed by December 2010. By the end of 2009, however, Ben Johnson of Planning, Design and Construction said the building was 58% complete and would be done ahead of schedule, in November 2010.

On October 26th, 2010, the Board of Regents voted to rename the College of Education Building to the Gary A. Ransdell Building, which was to take effect in January 2011. Construction was complete at the end of 2010, with the opening set for Jan. 3rd, 2011, hoping for full operation when Spring classes of 2011 began.

Namesake:
Gary A. Ransdell is originally from Louisville, KY. He earned a Bachelor of Arts degree from WKU in 1973, and a Master of Public Service degree in 1974. In 1978, he received a Doctor of Education degree from Indiana University. Ransdell's professional career began when he was made field representative in the now-named Office of Admissions. He was also Associate Director of Alumni Affairs from 1978 to 1981. He left to become Director of Alumni Relations of Southern Methodist University. Six year later, Ransdell was the vice president of Clemson University until 1997, when he went back to WKU to become the ninth president of the university on Sept. 12th.

During his 20-year tenure as President, Ransdell was instrumental in the rebuilding and expansion of WKU, which allowed for a vast list of accomplishments: two successful capital campaigns that raised more than $300 million; creation of the Honors College and the Gatton Academy of Mathematics and Science in Kentucky; expansion of Engineering degrees and four doctoral degree programs; expansion of WKU's regional campuses into Elizabethtown, Glasgow, and Owensboro; as well as two successful reaccreditation reviews.

On January 29th, 2016, Ransdell announced his retirement from WKU at the end of 2017. Before that, he would serve his last day as President on May 31st, 2017, preceding a six month sabbatical before full retirement. On February 7th, 2017, the Institute of Shipboard Education, parent of the Semester at Sea program, announced Ransdell would be replacing out going Loren Crabtree as president and CEO of SAS on Jan. 1st, 2018, the day after Ransdell fully retired from WKU.