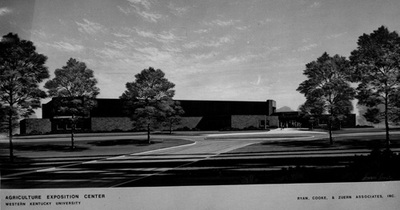 Namesake: Leonard D. Brown came to work in the WKU Agriculture Department in 1966. He served as department head for thirteen of his sixteen year tenure. He passed away in September 1982. Brown received his BS from WKU in 1954.

Thomas Meredith presented the following to the Board of Regents when recommending naming the Expo Center for him on September 16, 1988:

He left the position at Michigan State to return to his alma mater to accept a teaching position. He belied that teaching undergraduates at WKU and working with farmers and leaders in agriculture in Kentucky could influence the future of Kentucky. Dr. Brown made a professional sacrifice by leaving one of the nation's outstanding research universities in dairy science to take a position in the department where he had completed his undergraduate degree.

As a faculty member at WKU, he was recognized as an excellent teacher. He had the ability to teach complicated scientific principles in an enjoyable and easy-to-understand manner. He took a personal interest in students and followed their progress carefully. He set a high standard for other faculty as an advisor. His assistance to students did not end at graduation. Former students frequently returned to campus to seek counsel and advice from Professor Brown.

Under his leadership as Head of the Department of Agriculture, the enrollment and the faculty increased. New programs were added in the department, and faculty were encouraged to be effective in the classroom and to become more active in public service.

In the early 1970s, Dr. Brown initiated discussions about a major exposition center at the university farm. He worked with individuals on campus, in the region and in Frankfort to help make the exposition center a reality. The Center was in operation prior to his death in September 1982.

History - Construction on the Agricultural Expo Center began in May 1977. The center was completed in late 1979 with the university taking possession Jan. 3, 1980. The building includes a show arena with seating capacity of 2000, a demonstration arena which accommodates 300, an animal holding area that has washing areas, locker room, two conference rooms and office space. The first event, the National Hampshire Meat Hog Conference, was held in the facility on Jan. 7, 1980. The building was officially dedicated and named for Leonard Brown on Oct. 29, 1988.