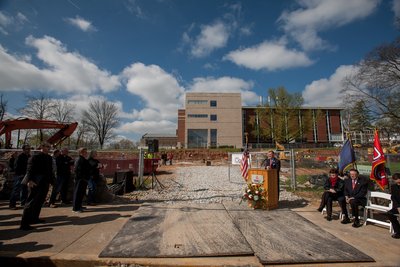 Building History:
On January 27, 2015, the North Wing of the Thompson Complex was fully bulldozed, a process that began over winter break. The bulldozing was part of a "master plan" to remodel the mathematics and science campus. Construction of the new building was to begin in December of 2015. However, none of the bids during that month could cover the budget. Through a process called value engineering, further examination of the current plans revealed a feasible obstacle. One of the features in the current plans was a connection to Snell Hall. There were concerns that the proximity to Snell Hall would allow construction noise to distract students during classes.

On April 5th, 2016, a groundbreaking ceremony was held to begin construction. By January 24, 2017, the primary structure was completed, and the roof 95% done. Construction was completed in mid-December 2017, and opened on time for winter semester classes in 2018.

In memory: Corner of building includes a stone with name of construction worker who died on site, "In memory of Jose Antonio Tello Romero."