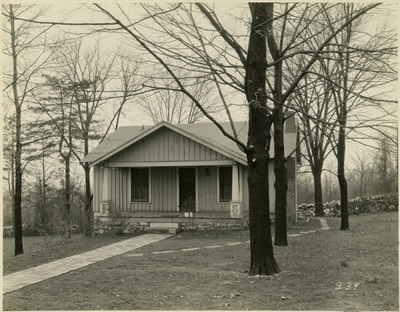 Home management was a required part of the Home Economics curriculum. This meant that students actually lived in a home with an instructor for a period of time. Several former homes on campus were used as Home Management Houses throughout WKU's history.

318 South Court Street in Cherryton was mentioned in the March 1928 Herald as being a four room shingled cottage. An instructor an two seniors lived in the home for a three week rotation. The February 1929 College Heights Herald reported the use of a three bedroom cottage located on the Ogden Campus that could house an instructor and three students at a time.

By 1941 the Rock House which could accomodate six students who stayed in the home for a nine week rotation. A home at 1563 Normal was used in 1948. It could house six students and their supervisor. The Home Management House rotation was decreased to six weeks. Later a home at 1526 State Street would be used for an eight week rotation. Eventually two apartments in Bates-Runner Hall were converted for use in home management training.