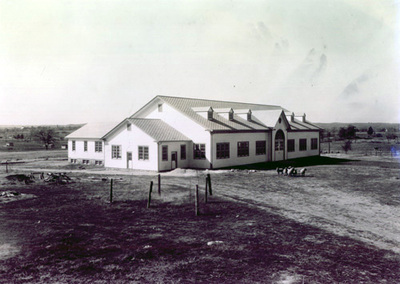 The only major addition to the Department of Agriculture's farm facilities in the 1930s was the construction and equipping of the Agricultural Pavilion. Located near the site now occupied by the Pearce-Ford Tower, its construction began in 1931 and continued for more than a decade as state appropriations and federal (PWA and WPA) grants were not always forthcoming.

The original plan, designed by Dr. Marion Ford, included: a judging pavilion 60' x 120', a poultry room with incubator, a cellar 20' x 35', a creamery 20' x 35' and two cattle barns each 35' x 60'. Later amendments provided for refrigeration and storage space. The refrigeration plant was not completed until 1940 when that session of the General Assembly appropriated the funds for that purpose.

The Pavilion also provided some classrooms and living quarters for agriculture students who were assisting in the care of the livestock on the campus farm. The work the students did consisted of the usual chores done around a livestock barn. They included feeding the poultry, sheep, swine and cattle and doing general cleaning about the barn. The work, one to one and one-half hours each day, paid the rent for their room.

By 1963 most of the farming operations on the lower campus farm had been transferred to the Covington farm on the Nashville Pike. The agricultural pavilion was no longer needed, but the site was badly needed for other purposes. Consideration was being given to demolishing the building, but this became unnecessary when, on Friday night, March 8, 1963, it was destroyed by fire of unknown origin. Some administrative officials considered it an act of Providence. The fire department was on the scene soon after the fire started, but, fortunately for the College, they were unable to save the building. The loss was partially covered by insurance, and the amount recovered was $48,759.24 for the building and $3,935.00 for the contents. [Excerpts from Herbert Coy's Road to Excellence: Agriculture at Western Kentucky University, 1998]