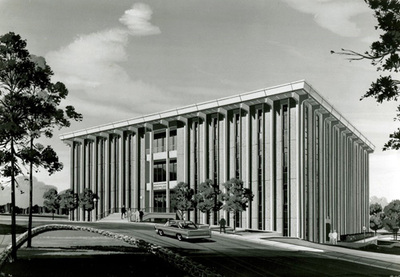 Namesake: Lawrence Wetherby born Jan. 2, 1908 in Middletown, Kentucky to Samuel and Fanny (Yenowine) Wetherby. His father was a doctor and a farmer. Wetherby attended the University of Louisville where he obtained a degree in law. He went on to serve in the Jefferson County court system. He was elected lieutenant governor in 1947 and became the forty-eighth governor when Gov. Earle Clements became Kentucky's U.S. senator. Wetherby went on to serve Kentucky in the state senate from 1966 to 1968. Upon leaving public service, Wetherby obtained a position at Brighton Engineering where he became a vice-president. He died March 27, 1994.

History: The Wetherby Administration Building was constructed to provide a larger space for the administrative units of WKU. The building opened in September 1967 and housed the offices of the President, Vice President of Academic Affairs, Graduate School, Undergraduate Instruction, Registrar, Admissions, Public Affairs, Student Affairs, Business Affairs and the Computer Center. It is a four story building and contains sixty-nine offices, work spaces and conference rooms.

The rectangular, four-story structure provides the University with office space for all of the school's major administrators.

The structure not only fulfills present physical requirements but has been designed to meet any increased needs in the future.

The completely air-conditioned building contains a total of 54,000 square feet of floor space, including 69 offices, work rooms and conference rooms.

The new structure is named in honor of Lawrence W. Wetherby, former governor of Kentucky.

Wetherby was born Jan. 2, 1908 in Middletown. He graduated in 1929 from the University of Louisville.

Wetherby was elected lieutenant governor in 1947, and served until 1950 at which time he succeeded Earle C. Clements as governor. He served as chief executive until 1955. He is past secretary of the Kentucky State Democratic Central Executive Committee and a member of both the Kentucky and Louisville Bar Associations.

Wetherby is married to the former Helen Dwyer. They have three children: Lawrence Jr., Suzanne and Barbara.