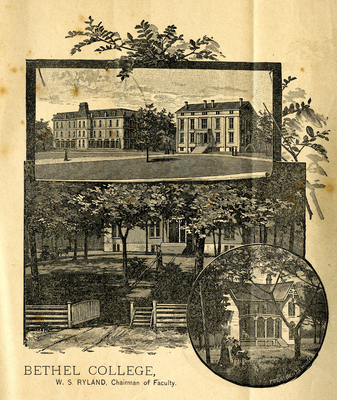 Bethel College is pleasantly situated in the town of Russellville, Logan County, Ky. The enterprise was originated in September 1849. The main hall was erected, and Bethel High School was formally opened January 3, 1854. Under the management of Mr. B.T. Blewitt, Principal, the school prospered greatly, and, owing to the evident public demand for collegiate instruction, a new charter was obtained, and the institution entered upon its career as a college in the fall of 1856.

President Blewitt continued the charge of the College, with great success, until the summer of 1861, when owing to the civil war, operations were suspended until September 1863. The college was then re-opened by Rev. Geo. Hunt, as President, who, under many discouragements, re-organized the College and gave it a new impetus.

President Hunt was succeeded in September 1864 by Prof. J. W. Rust. As a result of his remarkable energy and sound, practical sense, the College grew in numbers and influence, until, from impaired health, he was compelled to resign Feb. 1, 1868. Noah K. Davis, L.L.D., was then elected President. The system of instruction and the course of study were enlarged and improved by him and they mainly prevail in the college at the present time. In 1872 the President’s house was built at the cost of $7,000. In 1873 President Davis resigned, to take the chair of Moral Philosophy in the University of Virginia, and was succeeded by Prof. Leslie Waggener, as Chairman of the Faculty. In 1886-7 the N. Long Hall was erected at a cost of $20,000, “to furnish board to students at reduced rates.”

Prof. Waggener was elected President in June 1877, which position he held with honor to himself, and credit to the College, until June, 1883, when he resigned to accept the Chair of English Literature and History in the University of Texas.

In June, 1883, Prof.. Jas. H. Fuqua, an alumnus of the College, and Professor of Latin and Greek, was made Chairman of the Faculty. During his administration the patronage of the College increased considerably.

Declining to serve longer, he relinquished the Chairmanship June, 1887, and Prof. W.S. Ryland was elected to the vacancy.

It is the determination of Trustees and Faculty to maintain a high standard of scholarship, as it is their desire to contribute to society men of sound learning and thorough training.

One prominent object in the establishment of Bethel College was to furnish young men who were called to preach the gospel the means to secure an education at the least possible expense. To such it opens wide its doors and cordially invites them to come, and to receive its tuition free.

Read more from the Register of 1887-8 Bethel College