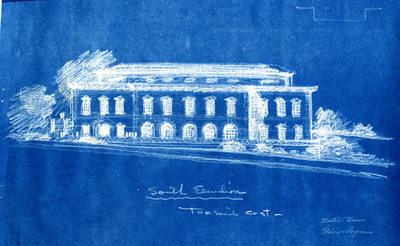 Namesake - Paul Loos Garrett was born in Waddy, Shelby County, Kentucky, on November 2, 1893. He earned an A.B. degree at Georgetown (KY) College in 1914 majoring in history and political science and an M.A. in 1935 in psychology and education. He did more graduate work at the University of Chicago and the University of Kentucky. He was awarded an honorary LL.D. from Georgetown College in 1938. After a brief stint in the army during World War I he went on to teach at several high schools throughout Kentucky, becoming superintendent of city schools at Versailles in 1924. In February 1937 Garrett took a leave of absence to serve in A.B. Chandler's administration as director of the Division of Personnel Efficiency. [Harrison, p. 110] Named for President Garrett by the Board of Regents on July 2, 1955.

History - "The completely air-conditioned Paul L. Garrett Student Center provides the Western campus with approximately three times its former space for student activities. The ground floor contains two cafeterias and accompanying kitchen facilities. Combined seating capacity for the two cafeterias is six-hundred and ninety-three. The first and second floors house fourteen meeting rooms, three conference rooms, the Snack Bar, Post Office, Center Store, Memorial Room and Faculty Room. One of the most magnificent features of the new structure is the Ballroom on the second floor, a spacious room that seats approximately one thousand for banquets and provides a beautiful setting for student dances and other activities." [The Paul L. Garrett Student Center open house, Oct. 23, 1965]

There was a bronze plaque with relief portrait of Paul Garrett measuring 25" x 36" in the vestibule.

Paul L. Garrett Student Center. Dedicated to the Memory of the man who served as president of Western Kentucky State College, September 1937 - February 1955. His greatest interest was the welfare of his students.

Additions:
1964 - expansion to triple the size began; additions to the lower level and to the 3rd floor, cafeteria was enlarged (app. $1.2 million)