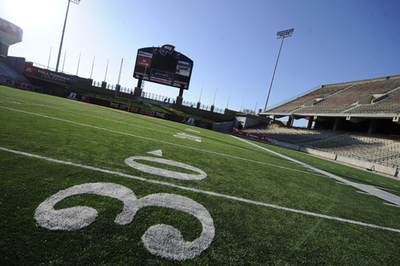 Namesakes: "L.T. Smith was Western's 4th football coach and the school's second basketball coach. Born in 1897, Smith came to Western in 1920 to teach in the industrial arts department. In 1957, Smith received the highest honorary award that can be given in the field of industrial arts and vocational education when he became the 4th man in the United States to receive the Laureate Honor from Epsilon Pi Tau, international honorary professional fraternity in industrial arts. A native of Sanborn, Iowa, Smith was graduated from Bradley Polytechnic Institute, Peoria, Illinois, now Bradley University, with the B.S. degree, majoring in industrial arts. He received the M.A. degree in industrial arts from George Peabody College for Teachers, Nashville, Tennessee, in 1931. He served as chairman of Western's faculty athletic committee which recommends and supervises college athletic policy." ["Amidst the Shouting -- New L.T. Smith Stadium Emerges as Future Home for WKU Football," Oct. 14, 1967.] Smith died in 1976 at the age of 79.

Originally founded as a grocery store in 1917 by Ervin Houchens, Houchens Industries has grown to multi-national organization owned and operated by its employees. The corporation has diversified into restaurants, insurance, financial services, construction, recycling and manufacturing. In July 2007 Houchen Industries donated $5 million to WKU for which their name was added to Smith Stadium. [http://www.houchensindustries.com/]

History: The stadium was dedicated on October 26, 1968. The stadium had a seating capacity of 19,250. It was equipped with 26 faculty offices, 11 physical education classrooms, lockers and shower rooms. A press box also accommodated 80 writers and broadcasters. A track encircles the playing field. Towards the south was a lighted field for varsity football practice, lighted tennis courts, and a new baseball field. In December of 1969, the stadium was cited for excellence in architectural design by the Kentucky Society of Architects of the American Institute of Architects. ["WKU Stadium Cited by Architects, Dec. 7, 1969"]

Namesake - Jimmy Feix came to Western as a freshman in 1949. He was a football player, an assistant football coach, a head football coach, and assistant alumni director, a director of alumni affairs, and a director of athletics. Feix was the first Hilltopper to ever win the football All-American honors. As head coach, his 16 teams won 106 games with 6 conference championships and 2 NCAA national runner-up trophies. ["Feix Field Dedication Set for October 26," Oct. 18, 1991]

The "Feix Field" ceremonies will occur at halftime of the Hilltoppers’ home game with nationally ranked Northern Iowa, which is set to kickoff at 7:00 p.m. (CDT).

The University’s Board of Regents named the field for Feix at its July 29 meeting.

Feix has been a part of the athletic scene at Western Kentucky almost continuously since he came to the Hill as a freshman from Henderson, Ky., in 1949.

The first Hilltopper ever to earn football All-American honors (quarterback, 1952), Feix is also the winningest gridiron coach ever on the Hill. The 16 Topper teams he guided as head coach won 106 games (almost double the second best total on that coaches’ list). His teams claimed six conference championships and two NCAA national runner-up trophies. And, he coached WKU 16 All-Americans who helped his team post an overall record of 106-56-6, a very impressive 64.9 winning percentage.