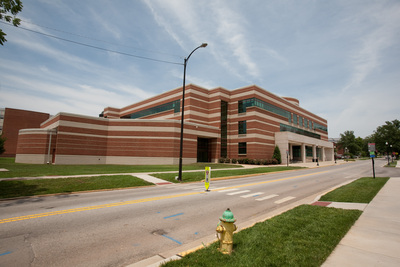 Building History:
The idea of a journalism facility was first brought up by Jo-Ann Albers, head of the School of Journalism and Broadcasting, in 1987. The building was one of "several items" approved by the Board of Regents for the 1997-1998 budget. At the time, however, they were originally planned to be two separate buildings: "a $7.5 million Commonwealth Center for Instructional Technology and an $8 million Western Journalism Building." The 3-story building was funded through an $18.5 million grant from the state. It houses the departments of Journalism, and the Information Technology. The first floor was to include electronic classrooms and two electronic photojournalism labs on one side, with seven 24-hour computer labs and a 266 seat auditorium on the other. It would also include an atrium that would stretch the full height of the building and include a skylight. The second floor would contain the classrooms and offices for print journalism and information technology. The third floor would include house broadcasting, public relations, advertising, administrative computing, network computing and micro computing.

The building is one of the most technologically advanced building on campus. [New Gateway to Tomorrow, Spring 2000] When bids came in for the original plans, they were 25% more than what the budget had allotted. In Jan. 2001, new plans were drawn up and 105,000 square feet were cut back to 94,355. A three story connector space that would have joined Mass Media and the Academic Complex were also cut from the plans. According to then-President Ransdell, a proposed auditorium and atrium space was scrapped as well from the new plans. In 1999, a "possible clocktower" was added to the project, which would be placed behind the building, "between Grise Hall and Academic Complex;" however, funds for the tower would come from private donations. Private donations were secured from Lowell Guthrie of $800,000. The tower would be named for him and dedicated to his brother Robert Guthrie, who died in the Korean War. When bids for the original project went 25 percent over budget, it was decided to build the tower separately from the building; eventually, it was reintroduced to the overall plans in Feb. 2001. Construction for the bell tower began on April 2001 at the same time as the Journalism and Technology Hall. Dedication would be held on May 6th, 2002, "about a month behind" schedule. The cupola was added on April 23, 2002. Interestingly, the building was the first to be directly built on campus since the Environmental Science and Technology Building in 1975. The building would house the departments of journalism and broadcasting, both having merged by July 1st, 1999 for the first time in 20 years.

During Construction, the building was having some difficulty getting a permanent name. Since 1999, Western sought $5 million from a donor in exchange for naming rights. In September 2004, Ransdell lowered the minimum donation for naming rights to 4.5 million. Originally, the building had the placeholder 'Journalism and Technology Building.' However, the name was changed in 2000 or 2001 to the Mass Media and Technology. Though no official explanation was ever given for this change, it can be assumed that it was to imply the presence of all different forms of media, which journalism could be categorized under. Even when Mass Media and Technology finally opened on October 22, 2004, the building still had not found an official name.

Construction of the Journalism and Technology Hall suffered numerous delays ever since its inception. Aside from some disappointment with the quality of architectural plans, groundbreaking was to start on Friday, April 26, 2000. If all gone accordingly, the building would open in Spring 2002. Yet when bids for the project went 25 percent over budget, construction was pushed back six months into October 2000. Progress stalled well into Feb. 2001, where bids were supposed to open on the 7th, but then pushed back to the 14th. This time, bids came under budget by 3 million, a more measured contrast to last year's bids. Star Construction was rewarded the contract for the lowest bid: $11 million. Groundbreaking started on April 6th, 2001, with hopes of construction complete by (Oct. or Nov.?) 2002. Relocation of some of the building's utilities pushed the completion date back to December 2002. On April 15th, 2002, construction was delayed - again. Negotiations by the state and Star Construction caused the delay, though it is not clear how the negotiations had any effect. Plus, at this point, naming rights were up for grabs with a 5 million price tag. Completion date was pushed back to May 2003. In January 2003, it was announced that construction was on track to meet its end-of-spring deadline. In the meantime, furnishings would be moved to the third floor by May 6th, the second floor by May 17th, and the first floor by July 7th. But even though all journalism classes, except photojournalism, had moved in by the new semester, most equipment and faculty would not arrive until early to mid-September. The slow transition was blamed on Star Corporation pulling out of the project back in June due to inadequate staff and "financial problems." Merit Construction Inc. of Knoxville, TN was brought in to complete the project. Even so, construction continued well throughout September and into October. The building was dedicated on Friday Oct. 22, 2004.

On October 15, 2007, Einstein Bros. placed a bid for space in the right side of the patio, but the bid, $297,000, was higher than the expected $250,000. The expectancy was due to the small space that the patio offered and other spaces were offered. Nevertheless, Einstein Bros. chose the patio for its central placement on campus. Einstein Bros. opened on March 4th, 2008, after a delay to give more training to employees.

When Mass Media and Technology Center was completed, the data center was originally "equipped with enough power to run the number of systems." But by October 2007, the number of systems "has doubled." In light of this increase, updates were planned for next year. The first update was to add more electricity to better serve the increase in systems. The second update would be to install blade servers, which house multiple electronic circuit boards, each with their own server. Only half the size of original server boards, they would save shelf space as well as create more virtual labs.

Namesake - Walter "Jody" Richards was born on Feb. 20, 1938 in Louisville, KY. Richards lived in Columbia, Kentucky for most of his early life. He attended Kentucky Wesleyan University and graduated with an Associate Bachelor's degree in English in 1960. He then attended the University of Missouri and graduated with a Major Associate's degree in Journalism in 1962. After graduation, Richards briefly served as an Instructor of English + Journalism at Amarillo College in Amarillo, Texas. In 1963, he was employed as assistant professor of English and director of Communications at Western Kentucky University. He temporarily suspended his teaching career in 1965 to resume work on a Doctor of Philosophy degree at Indiana University. He again suspended his instruction in the school year 1970-71.

Richards served on the House of Representatives from 1976 to 2018, 42 years. During those years, he served on numerous legislative sections. He was the House Education Committee Chairman from 1977 to 1985, and served in the House Majority Caucus Chairman from 1986 to 1995, when he was elected to the Speaker of the House from 1995 to 2009. This 14-year tenure was the longest-running tenure in the history of the Kentucky House of Representatives (he briefly returned to this position in 2015). As representative of the 20th House District, Richards was a vociferous advocate for education reform. Among his accomplishments were the passage of The Kentucky Reform Act of 1990, which affected K-12 schools, and the creation of Gatton Academy and the engineering program at WKU. He also sponsored the 1997 postsecondary education reform. He also backed the creation of a code ethics for WKU These accomplishments reflected well in Warren County, where the Board of Education named an elementary school in honor of Richards.

Richards ran unsuccessfully for the Democratic nomination for Governor of Kentucky at least two times. The first time was in 2003, when he lost to Ben Chandler. The second was on January 24, 2007, with his running mate John Y. Brown III. In 2012, Richards became the first House member to receive the MVP Award from the Kentucky Chamber of Commerce.

WKU renamed the Mass Media and Technology Hall in honor of Richards on May 4th, 2017 at 1pm. On Monday, Jan 08, 2018, Richards announced he would not seek another term as representative.