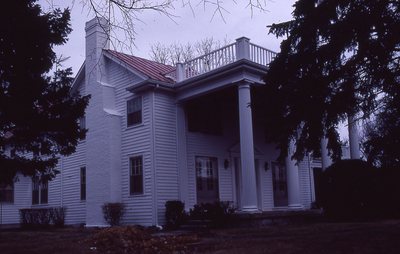 Andrew M. Whitney House. This house is located 1.8 miles NW of Maynard on Route 1885 in the Austin Quad. It was built around 1850 and was a part of the original Whitney Plantation founded by John Whitney, Sr. John Whitney, Sr. was a Revolutionary War soldier who received the Federal Land Grant of 1666 acres in 1793. He is buried on a part of the Plantation. Andrew M. Whitney made many changes to the farm during his ownership during the 1920's and 1930's. A. M. Whitney was very successful in his trucking business, which contributed much to the community. This house is listed on the National Register of Historic Places for Allen County.