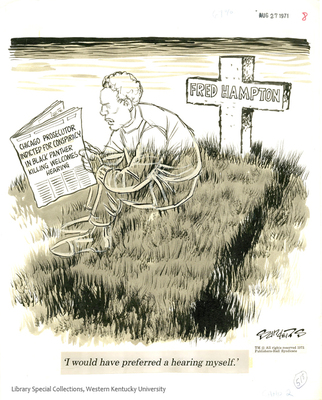 On August 24, 1971, a grand jury indicted Cook County States Attorney Edward V. Hanrahan and 13 police officers on charges related to the December 1969 raid that killed Fred Hampton, the chair of the Illinois State Black Panther Party, and Party organizer Mark Clark. The original investigation assigned blame for the shootout on seven suspected members of the Black Panthers, including Hampton and Clark. Problems with the investigation emerged however, including a finding that nearly 100 shots were fired, mainly by the police. Ultimately, a special state’s attorney was appointed in June 1970 to review the case. The subsequent grand jury indictment listed several overt acts, including improper processing of a crime scene, providing misleading and false information to a newspaper, staging a knowingly false reenactment, and giving false testimony. Sixteen months later, after several newly discovered witness statements cast doubt on the testimony of four of the Black Panthers, the trial judge acquitted the defendants, citing a lack of evidence. Hanrahan’s political career was finished however, and in 1982 the Federal government, Cook County and city of Chicago agreed to pay $1.85 million to nine plaintiffs to settle a civil lawsuit.