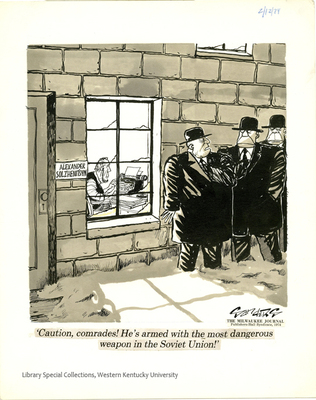 The publication of The Gulag Archipelago, 1918-1956 by Aleksandr Solzhenitsyn in December 1973 created a worldwide sensation. The author used the knowledge he had gained from spending 11 years in Soviet prison camps and in exile in remote parts of the Soviet Union to write an historical and psychological examination of a system he traced back to Lenin. Fearing the confiscation and destruction of his manuscript, Solzhenitsyn had it smuggled to Paris and published. After Soviet authorities failed to persuade the winner of the Nobel Prize for Literature in 1970 to leave the Soviet Union, they revoked his citizenship for “performing systematically actions that are incompatible with being a citizen” and involuntarily deported him to West Germany on February 12, 1974.