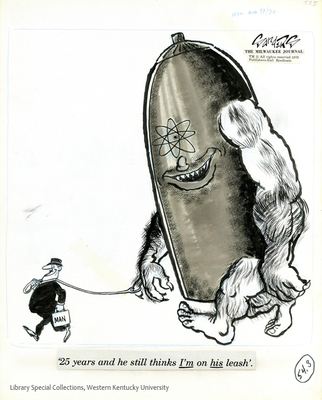 This cartoon places the then ongoing Strategic Arms Limitation Talks (SALT) between the United States and the Soviet Union against the backdrop of the 25th anniversary of the dropping of atomic bombs on Hiroshima (August 6, 1945) and Nagasaki (August 9, 1945).

During this second round of SALT talks, American negotiators presented an “outline” which called “for numerical limitations on all offensive and nuclear delivery systems.” Under it, both nations would be free to determine the actual breakdown between “land- and sea-based intercontinental ballistic missiles and strategic bombers.”

The third round of talks began in November 1970 with negotiations continuing for nearly two more years. On May 26, 1972, President Nixon and General Secretary Brezhnev signed the Anti-Ballistic Missile (ABM) Treaty and the Interim Agreement on Strategic Offensive Arms.