‘Quick! Another $222 million and we can prop this thing back up again!’ 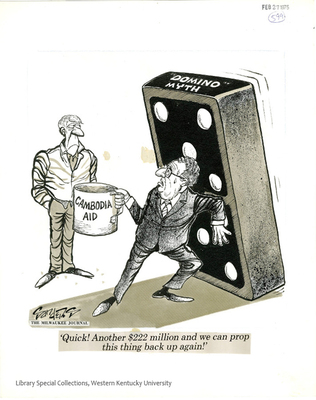 In February 1975, President Ford warned that “An independent Cambodia cannot survive unless the Congress acts very soon to provide supplementary military and economic assistance.” Secretary of State Henry Kissinger invoked the specter of Eisenhower’s “Domino Theory,” the belief that if one country in Southeast Asia fell to communism, all would. “I know it is fashionable to sneer at the words ‘domino theory’ … we’ve been torn apart by the Vietnam war long enough. But I do not believe we can escape this problem by assuming the responsibility of condemning those who have dealt with us to a certain destruction.” Unpersuaded, Congress refused to authorize additional spending, and Cambodia fell to the communist Khmer Rouge on April 17.