‘But I was only following orders!’ 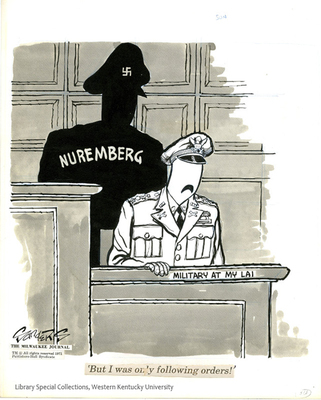 This cartoon compares the conduct of U.S. forces at the village of My Lai, South Vietnam, on March 16, 1968, to that of the German officers tried for war crimes at the end of World War II. Official after-action reports initially described the engagement as a fire fight with the Vietcong and minimized the number of civilian deaths. Reports of civilian casualties eventually grew to several hundred. The massacre became publicly known a year later, and the military handed down its first indictment in September 1969.