‘When I said we were withdrawing from Vietnam, I didn’t say by what route.’ 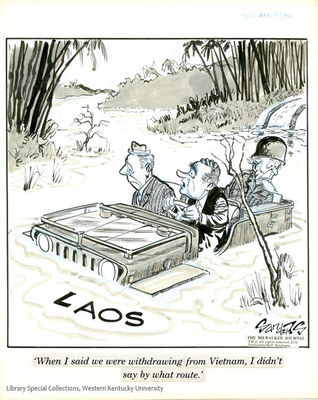 During the Spring of 1970, the Nixon Administration bombed the North Vietnamese forces as they moved down the Ho Chi Minh Trail through Laos even while it was withdrawing 50,000 U.S. troops from South Vietnam. Although Laos was officially neutral, North Vietnam had perhaps 40,000 troops there, and the United States flew bombing runs out of Laotian and Thai air bases. The Administration’s credibility over the use of ground troops in Laos was being questioned as it had recently revealed the death in ground combat of an American military adviser in 1969. At a March 1970 press conference, the President highlighted the importance of the 2000-mile border Laos shared with Thailand and the large population of ethnic Laotians living in Thailand. “If Laos were to come under the domination of a Communist North Vietnamese government, it would be an enormous threat to Thailand.” Earlier that month, Secretary of State William P. Rogers had testified that “We have no present plan if it [Laos] is overrun [by the communist Pathet Lao] to use combat troops. Secretary of Defense Melvin R. Laird made the importance of bombing the Ho Chi Minh Trail in Laos clear however, noting that “it does have a considerable effect on the safety and security of Americans in South Viet Nam.”