WATERGATE IS BREAKING UP THAT OLD GANG OF MINE 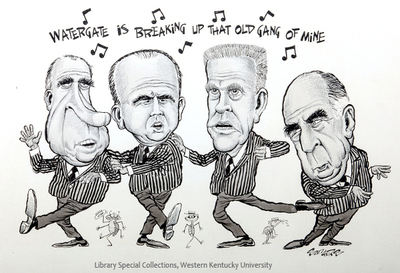 On March 1, 1974, a grand jury in Washington D.C. indicted former Attorney General and Director of the President’s re-election campaign John N. Mitchell, White House Chief of Staff H. R. (Bob) Haldeman, and White House Domestic Affairs Advisor John D. Ehrlichman as well as two other aides and a lawyer from the 1972 campaign on charges of conspiracy. Six of the seven were also charged with obstruction of justice, two with perjury and three with making false statements. Less than a week later, Ehrlichman, along with White House aide Charles W. Colson, was indicted on conspiracy charges regarding the 1971 break-in at the office of the psychiatrist for Daniel Ellsberg, the federal contractor who leaked the Pentagon Papers to the New York Times. On January 1, 1975, the jury convicted five of the seven; seven weeks later Mitchell, Haldeman, and Ehrlichman were sentenced to terms of 30 months to eight years in prison.