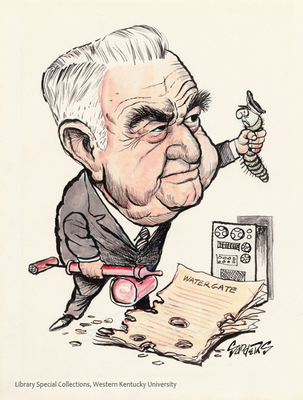 This cartoon captures the bushy eyebrows and heavy jowls of Senator Sam Ervin, Jr. (D-NC), who became a household name for his leadership of the Senate “Watergate Committee.” Appointed chair of the newly authorized Select Committee on Presidential Campaigns in February 1973, Ervin had no presidential aspiration and was widely recognized as a legal scholar and strict constitutionalist. Broadcast live on public television, the hearings attracted a national audience and Ervin became known as “Senator Sam.”

At the opening hearing on May 13, 1973, Ervin summarized their importance to the nation’s survival. “The questions that have been raised in the wake of the June 17 break-in strike at the very undergirding of our democracy. … And if these allegations prove to be true, what they were seeking to steal was not the jewels, money or other property of American citizens, but something much more valuable – their most precious heritage – the right to vote in a free election.”

When he and President Nixon clashed over the doctrine of executive privilege as it related to tapes of White House conversations, Ervin noted that “there is nothing in the Constitution that requires the President to run for re-election. I don’t think executive privilege covers any political activities whatsoever.”