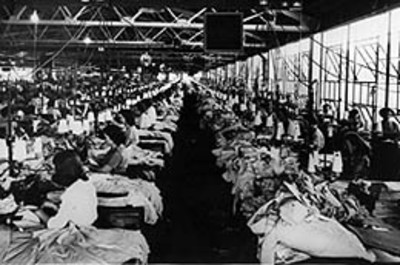 During the last 150 years Warren County has become home to several textile manufactories. The Bowling Green Woolen Mills operated for much of the latter half of the nineteenth century from a factory on the Barren River.

Union Underwear, the maker of Fruit of the Loom, BVDs and Underoos, was founded in 1926 in Indianapolis by Jacob Goldfarb. As demand for his "union suit" increased, Goldfarb located manufacturing plants in Illinois and Kentucky. The company's Bowling Green plant opened on Church Street in 1941 as The Derby Underwear Company. Locally known as the "Derby," the plant doubled in size by 1950. They later moved corporate headquarters to Bowling Green and are presently known as Fruit of the Loom, Inc. Having sewn innumerable pairs of underwear and other garments over the years, employees rightly claim their role in keeping America comfortably clothed.