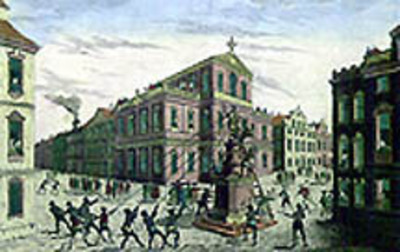 On January 2, 1798 the Warren County Court created a town on thirty to forty acres of land donated by Robert Moore. On March 6, 1798 the court named the town "Bolin Green" reputedly after an incident at Bowling Green Square in New York City where Revolutionary patriots destroyed a statue of King George III. By 1810 the settlement had twenty-three households and 154 residents.

Rebels Pulling Down the Statue of King George III, 1776. Patriots fired at the British with bullets reputedly made from the lead statue that sat on the Bowling Green Square in New York City.