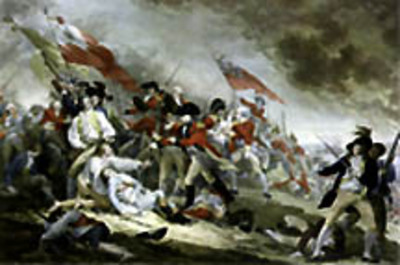 Warren County, formed from Logan in 1797, was named after General Joseph Warren, a Massachusetts physician and political leader, who died at the Battle of Bunker Hill. The county built its first courthouse on Bowling Green's present day Fountain Square. In March 1798 court was first held in the 20' x 24' log structure. In 1805 the county court established the communities of Jeffersonville and New Town nearby. For several years these three settlements battled to become the county seat.

In 1807 the court ordered a courthouse erected in Jeffersonville located on the banks of the Barren River. When construction was delayed, a legislative commission decided the old log structure should be moved from Bowling Green to Jeffersonville. The 1809 Kentucky General Assembly proclaimed Bowling Green the county seat and two years later the county built its second courthouse on the square. Read more of the history of the county.

The Death of General Warren at the Battle of Bunker Hill, by John Trumbull, 1798. Warren County was named after General Joseph Warren.