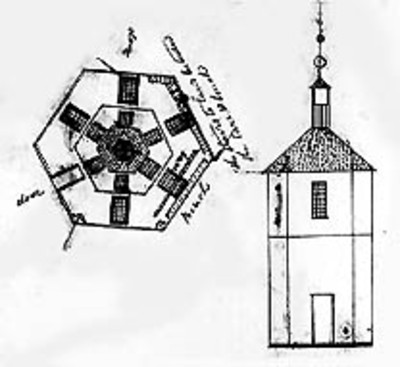 In 1784 Virginia opened the Green River district in Kentucky to her Revolutionary War veterans. Settlers quickly populated the land south of the Green River. Andrew McFadden, an early pioneer, built a station near the mouth of Drakes Creek. McFadden's Station was a frequent stopping place for travelers on the Cumberland Trace. Kentucky became the United States' 15th state on June 1, 1792.

Proposed plan for the 1807 Warren County Courthouse. The seat of Warren County's government was in dispute for several years. At one point, plans were submitted to the court for a building more substantial than the existing log one. Never built, sketches show a structure hexagonal in shape and designed with a stone foundation, walls three bricks thick and a cupola supported by six large beams.