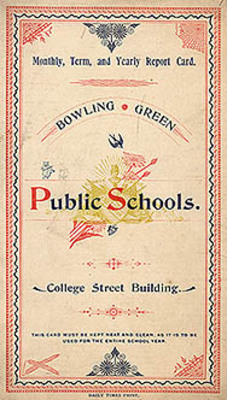 In 1855 Kentucky's Superintendent of Public Instruction reported to the General Assembly that, on an average, 31% of Warren County's 3,575 white children attended school. That year the state allotment of $2,502.50 was shared among the county's 61 common schools. Only four of these schools offered more than a three-month session. A lack of financial support, textbooks, courses of study and qualified teachers plagued Kentucky's educational system during much of the nineteenth century. In Bowling Green, a number of private schools opened after the Civil War. The first graded, separate public elementary schools were established for black and white children in the town in the 1882.