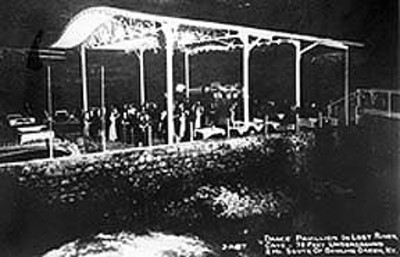 In 1924 a two-story restaurant was built on the site of the former Skaggs Mill that had stood above Lost River Cave. Following a 1926 fire, a supper club opened on the site. An in-cave nightclub, opened in 1934, boasted a beer garden, cafe, bandstand, private rooms and a roof over the dance floor to prevent condensation from dripping on the dancers.The club closed in 1949, in part because big bands and ballroom dancing had begun to wane in favor of more family-oriented activities.

Once the site of an old mill, Lost River became an in-cave club in 1934.