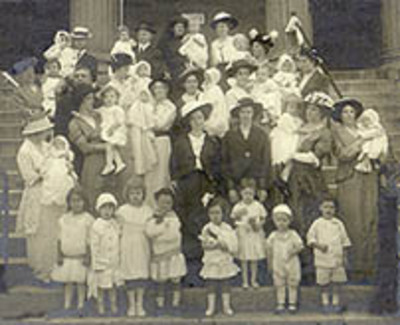 Cradle Roll at First Baptist Church in Bowling Green, ca. 1914. The white Baptist church was organized in Bowling Green in 1818 as the United Baptist Church. In the 1850s they constructed the Main Street building of brick, and in the mid-1910s built a large structure on Twelfth and Chestnut streets. Because the building was made of Warren County limestone,which bleaches white in the sun, the church was called the "great white temple." This structure was rebuilt and opened in January 1995 after burning three years earlier.