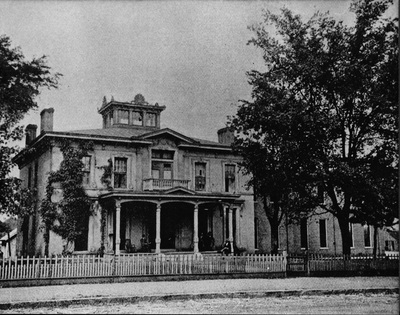 In 1883 in order to secure the services of A.W. Mell and J. Tom Williams, Bowling Green subscribers had paid three thousand dollars in cash for tuition vouchers that would be accepted at the new "Southern Normal School & Business College." Some benefactors gave the vouchers to students; others sold them, often at a discount. The proprietors purchased for twelve thousand dollars a large building located on College Street between Eleventh and Twelfth streets that had housed the defunct Bowling Green Female College. The facilities were not entirely adequate, and each morning Professor Mell led the students and faculty to the Opera House on the town square for chapel exercises. Some of the business classes were apparently held in Getty's Hall on the north side of the square. As soon as possible, Mell and Williams built eating and housing accommodations for the students. Bowling Green sophisticates often called the mess hall "the soup-house," a term resented by many of the students. When a charter was granted by the General Assembly in 1886, the school's name was shortened to "Southern Normal School."

Many students attended for only part of the year, so that out of the nearly seven hundred listed in the 1884-85 school year, perhaps no more than four hundred were enrolled at any time. This number meant that Mell and Williams had to employ ten teachers in addition to the four who taught in the adjunct department of music. The school's catalog showed eight departments, but that was done largely for publicity purposes. A more realistic division would have been the normal school, the literary department, and the commercial department. Nearly two-thirds of the students in 1884-85 were enrolled in the commercial department headed by J. Tom Williams, who also served as business manager. Mell supervised the remainder of the work and was listed on the faculty of seven of the eight departments, music being the only area he avoided.

Only two courses of study, the scientific and the classic, led to the granting of bachelor's degrees. The degree requirements tell a great deal about the Southern Normal's level of work

As weak as these requirements were (the "thesis" was the equivalent of a short term paper), they represented a definite effort to upgrade the qualifications for teachers.

Mell and Williams would quit the school in 1890 and eventually the Cherry brothers purchased the Southern Normal and reopened it in 1892 as the Bowling Green College & Literary Institute.