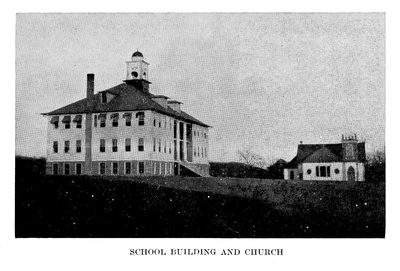 Annville Institute founded in 1909 by the Reformed Church Women’s Board of Domestic Missions and headed by Rev. William Worthington, offered grammar school and high school courses to the families of the Annville community in Jackson County, Kentucky. The institute closed in 1978 and since the property has been used for other community mission organizations.

The goal of the institute was to give the mountain people the best possible opportunity for the largest development for service in home, church and state.

The 1926-27 catalog states a tuition fee of thirty dollars, fifteen dollars each semester, is charged each year. A fee of one dollar a semester will be charged to all students for the use of the textbooks.

By a system of scholarships, which means money sent from the North for the support of each student, the difference between the cost of the Institution for the support of the student and the value of actual service rendered, is covered. Everyone will understand that this is the only way in which it would be possible for us to allow such generous terms of self-support as those described above. It is evident that the work for which the students are paid is care of buildings, dining room, and such work which is for the students themselves. The Institution therefore is making no profit as the students are working for themselves. The system of scholarships, makes it possible, however, for us to credit each student for work done. By this system the parents can reasonably expect the charge that they will be asked to pay need not exceed $1.50 a week if the student is strong and willing to work. Students working for the Institution for six weeks during the summer months may become self-supporting.

Read more from the Catalog of Annville Institute 1926-7.