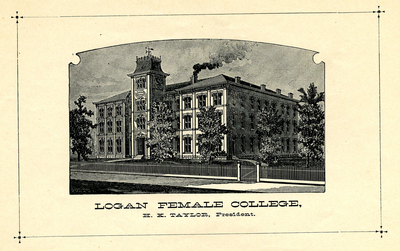 In Through My Father’s Eyes: The Story of Logan County, Kentucky, Edward Coffman, Jr. gives the following description of Logan College on pages 178-180.

Logan College had its beginning in the year 1856. In that year the Rev. James E. Carnes was closing a pastorate and a group of young men who desired to keep him in Russellville formed a stock company and bought the property of the Russellville Academy. This school had been in existence for a number of years and was located in the old Masonic building at the northeast corner of Seventh and Summer streets.

Mr. Carnes served as principal of the new school for two years from 1856 to 1858. The Rev. Edward Stevenson, who served two pastorates in Russellville before this, became head of the school. During his administration the Methodist Church purchased the property, making an addition to the brick building to provide a dormitory for the girls. In 1860 the institution was chartered as the Russellville Collegiate Institute, with power to grant diplomas. Edward Stevenson served six years as president until his death on June 6, 1864.

David Morton was chosen his successor and took charge of the school in September 1864. During his four years from 1864 until 1868, the school prospered and grew. In 1867 the name was changed to Logan Female College under a charter which David Morton wrote and had the legislature pass within a few days. He was connected with the college for twenty-eight years as president, agent and director. He was instrumental in the raising of about $5000 for the erection of a new building across the street from the old one, on the southeast corner of Seventh and Summer streets.

In 1874 there were about one hundred students in attendance. There were two departments, college and primary. Under the A.G. Murphy administration enrollment reach as high as one hundred fifty. Logan College continued as a four year college, granting degrees of B.A. and B.S. until 1916. From 1917 to 1931 it was a junior college, giving diplomas of Associate in Arts.

The building erected in 1872 was a three story brick with wings extending backward at each end. In 1912 a three story brick addition called Lander Hall was added to the west side and contained an auditorium with stage equipped with footlights. A gymnasium and music and art rooms were on the second and third floors. About 1920 another brick building was added which contained an ample gymnasium and a 40x60 feet swimming pool.

From early years, courses in music and the fine arts were offered. Throughout its existence the school was owned and operated by the Methodist Episcopal Church South. The end of the college came during the early years of the depression of the 1930s. Logan College closed its doors at the end of the scholastic year in May 1931. The property was purchased by the Russellville school board, and became a part of the town school system.