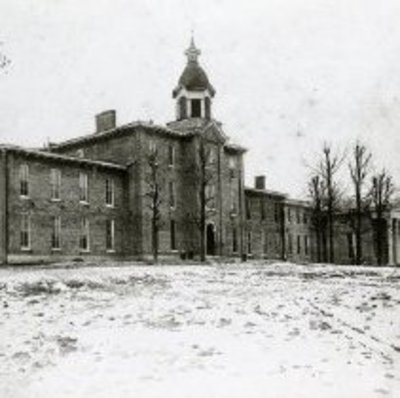 Liberty College is the outgrowth of the interest and enterprise manifested in the cause of higher education by the citizens of Glasgow, Kentucky and of the Baptists of Liberty Association, from which body it received its name. The one principally instrumental in its foundation is Rev. N.G. Terry . . . who was for a number of years in charge of Allen Lodge Female College, a local institution situated at Glasgow, of which in a sense Liberty College may be considered a development.

Dr. [Basil] Manly drafted the charter for the proposed institution, and it was largely through his influence that it was passed by the State legislature in 1873. According to this instrument, the college was to be managed by a board of 16 regents or trustees, elected, two each year after the first year, by the association after which it was named.

. . . a handsome brick building, partly two stories and partly three stories in height, with a front of 140 feet and a depth of 80 feet, erected at a cost of about $25,000. This structure, which was completed in 1875 is well adapted for its uses and contains in addition to its excellent rooms for educational purposes, accommodations for 40 boarding pupils. The institution was at first designed only for young ladies and was conducted for many years as an exclusively female college.