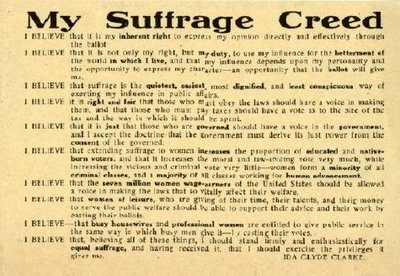 Suffrage Creed attributed to Ida Clyde Clarke. Clarke was an author and was on the editorial staff of the Nashville Tennessean and the Nashville Banner.

I believe that it is my inherent right to express my opinion directly and effectively through the ballot.

I believe that it is not only my right, but my duty to use my influence for the betterment of the world in which I live, and that my influence depends upon my personality and the opportunity to express my character -- an opportunity that the ballot will give me.

I believe that suffrage is the quietest, easiest, most dignified and least conspicuous way of exerting my influence in political affairs.

I believe that it is just that those who are governed should have a voice in the government, and I accept the doctrine that the government must derive its just power from the consent of the governed.

I believe that extending suffrage to women increases the proportion of educated and native-born voters, and that it increases the moral and law-abiding vote very much, while increasing the vicious and criminal vote very little - women form a minority of all criminal classes, and a majority of all classes working for human advancement.

I believe that the seven million women wage-earners of the United States should be allowed a voice in making the laws that so vitally affect their welfare.

I believe that women of leisure, who are giving of their time, their talents, and their money to serve the public welfare should be able to support their advice and their work by casting their ballots.

I believe that busy housewives and professional women are entitled to give public service in the same way in which busy men give it - by casting their votes.

I believe that, believing all of these things, I should stand firmly and enthusiastically for equal suffrage, and having received it, that I should exercise the privileges it gives me.