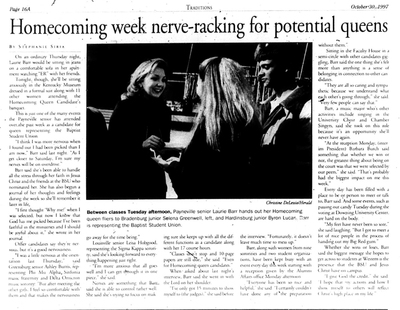 On an ordinary Thursday night, Laurie Barr would be sitting in jeans on a comfortable sofa in her apartment watching ER with her friends.

Tonight, though, she'll be sitting anxiously in the Kentucky Museum dressed in a formal suit along with 11 other women attending the Homecoming Queen Candidate's banquet.

This is just one of the many events the Payneville senior has attended over the past week as a candidate for queen representing the Baptist Student Union.

"I think I was more nervous when I found out I had been picked than I am now," Barr said last night. "As I get closer to Saturday, I'm sure my nerves will be on overdrive."

Barr said she's been able to handle all the stress through her faith in Jesus Christ and the friends at the BSU who nominated her. She has also begun a journal of her thoughts and feelings during the week so she'll remember it later in life.

"I first thought 'Why me?' when I was selected, but now I know that God has me picked because I've been faithful in the ministries and I should be joyful about it," she wrote in her journal.

Other candidates say they're nervous, but it's a good nervousness.

"I was a little nervous at the orientation last Thursday," said Greensburg senior Ashley Burris, representing Phi Mu Alpha Sinfonia music fraternity and Delta Omicron music sorority. "But after meeting the other girls, I feel so comfortable with them and that makes the nervousness go away for the time being."

"I'm more anxious that all goes well and I can get through it in one piece," she said.

Nerves are something that Barr said she is able to control rather well. She said she's trying to focus on making sure she keeps up with all the different functions as a candidate along with her 17 course hours.

"Classes don't stop and 10-page papers are still due," she said. "Even for Homecoming queen candidates."

When asked about last night's interview, Barr said she went in with the Lord on her shoulder.

"I've only got 15 minutes to show myself to (the judges)," she said before the interview. "Fortunately, it doesn't leave much time to mess up."

Barr, along with women from nine sororities and two student organizations have been kept busy with an event every day this week starting with a reception given by the Alumni Affairs office Monday afternoon.

"Everyone has been so nice and helpful," she said. "I certainly couldn't have done any of the preparation without them."

Sitting in the Faculty House in a semi-circle giggling, Barr said the one thing she's felt more than anything is a sense of belonging in connection to other candidates.

"They are all so caring and sympathetic because we understand what each other's going through," she said. "Very few people can say that."

Barr, a music major who's other activities include singing in the University Choir and Chamber Singers, said she took on this role because it's an opportunity she'll never have again.

"At the reception Monday (interim President) Barbara Burch said something that whether we win or not, the greatest thing about being on the court was that we were selected by our peers," she said. "That's probably had the biggest impact on me this week."

Every day has been filled with a place to be or person to meet or talk to, Barr said. And some events, such as passing out candy Tuesday during the voting at Downing University Center, are hard on the body.

"My feet have never been so sore," she said laughing. "But I got to meet a lot of nice people in the process of handing out my Big Red gum."

Whether she wins or loses, Barr said the biggest message she hopes to get across to students at Western is the presence that the BSU and Jesus Christ have on campus.

"I give God the credit," she said. "I hope that my actions and how I show myself to others will reflect Christ's high place in my life."