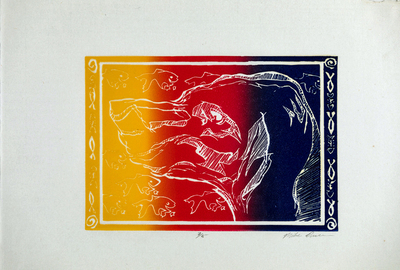 Untitled rainbow relief print, edition 2/5. The print is of a dog with several fish.

Note: The artist noted that he used a speed ball carving tool to carve out the design on battleship linoleum tile. After carving out the design, he rolled on the ink and then applied paper to the block. He also recalled that his inspiration was the dog at the foot of the "Winter" statue, which was part of the "Four Seasons" statues that used to be on exhibit in the "Italian Garden" outside of the original Snell Hall. This set of statues were conserved and moved to niches inside Van Meter Hall in 2006.