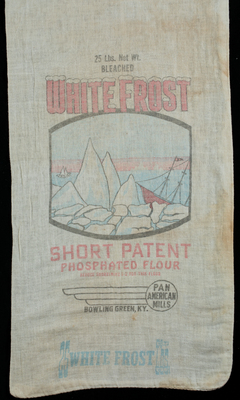 White Frost [25 pounds, cloth flour bag] produced by the Pan American Mills in Bowling Green, Kentucky. The Pan American Mills stood at 1239 Adams Street in Bowling Green, Kentucky, adjacent to the tracks of the Louisville & Nashville (now CSX) railroad tracks. This cloth bag features a polychromed inking of an arctic scene filled with icebergs. In the foreground a ship has hit one of the icebergs and is sinking. Another ship remains afloat in the background. This bag also includes the streamlined logo of the Pan American Mills. White Frost is called a "phosphate flour" which means that it is made from soft wheat to which monocalcium phosphate has been added in order to improve the baking qualities. The bag also instructs cooks to "reduce shortening 1-2 for this flour." The title "White Frost" appears in red with snow atop it.