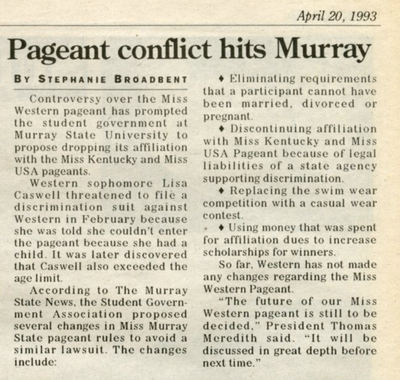 Controversy over the Miss Western pageant has prompted the student government at Murray State University to propose dropping its affiliation with the Miss Kentucky and Miss USA pageants.

Western sophomore Lisa Caswell threatened to file a discrimination suit against Western in February because she was told she couldn't enter the pageant because she had a child. It was later discovered that Caswell also exceeded the age limit.

According to the Murray State News, the Student Government Association proposed several changes in Miss Murray State pageant rules to avoid a similar lawsuit. The changes include:

So far, Western has not made any changes regarding the Miss Western Pageant.

"The future of our Miss Western pageant is still to be decided," President Thomas Meredith said. "It will be discussed in great depth before next time."