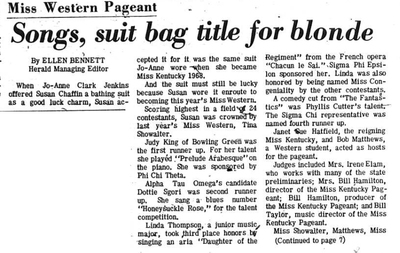 Article from the College Heights Herald regarding the Miss Western pageant:

When Jo-Anne Clark Jenkins offered Susan Chaffin a bathing suit as a good luck charm, Susan accepted it for it was the same suit Jo-Anne wore when she became Miss Kentucky 1968.

And the suit must still be lucky because Susan wore it enroute to becoming this year's Miss Western.

Judy King of Bowling Green was the first runner up. For her talent she played "Prelude Arabesque" on the piano. She was sponsored by Phi Chi Theta.

Linda Thompson, a junior music major, took third place honors by singing an aria "Daughter of the Regiment" from the French opera "Chacun le Sai." Sigama Phi Epsilon sponsored her. Linda was also honored by being named Miss Congeniality by the other contestants.

A comedy cut from "The Fantastics" was Phyllis Cutter's talent. The Sigma Chi representative was named fourth runner up.

Janet Sue Hatfield, the reigning Miss Kentucky, and Bob Matthews, a Western student, acted as hosts for the pageant.