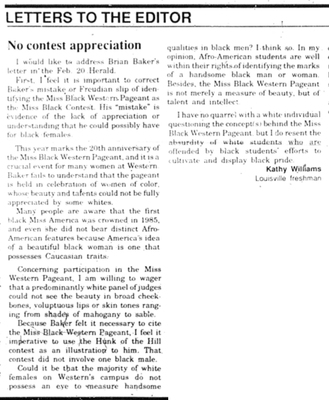 Kathy Williams' letter to the editor of the College Heights Herald regarding the Miss Black Western contest.

I would like to address Brian Baker’s letter in the Feb. 20 Herald.

First, I feel it is important to correct Baker’s mistake or Freudian slip of identifying the Miss Black Western Pageant as the Miss Black Contest. His “mistake” is evidence of the lack of appreciation or understanding that he could possibly have for black females.

This year marks the 20th anniversary of the Miss Black Western Pageant, and it is a crucial event for many women at Western. Baker fails to understand that the pageant is held in celebration of women of color, whose beauty and talents could not be fully appreciated by some whites.

Many people are aware that the first black Miss America was crowned in 1985, and even she did not bear distinct Afro-American features because America’s idea of a beautiful black woman is one that possesses Caucasian traits.

Concerning participation in the Miss Western Pageant, I am willing to wager that a predominantly white panel of judges could not see the beauty in broad cheekbones, voluptuous lips or skin tones ranging from shades of mahogany to sable.

Because Baker felt it necessary to cite the Miss Black Western Pageant, I feel it imperative to use the Hunk of the Hill contest as an illustration to him. That contest did not involve one black male.

Could it be that the majority of white females on Western’s campus do not possess an eye to measure handsome qualities in black men? I think so. In my opinion, Afro-American students are well within their rights of identifying marks of a handsome black man or woman. Besides, the Miss Black Western Pageant is not merely a measure of beauty, but of talent and intellect.

I have no quarrel with a white individual questioning the concept(s) behind the Miss Black Western Pageant, but I do resent the absurdity of white students who are offended by black students’ efforts to cultivate and display black pride.