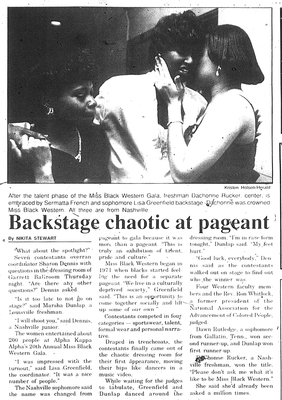 “What about the spotlight?”

Seven contestants overran coordinator Sharon Dennis with questions in the dressing room of Garrett Ballroom Thursday night. “Are there any other questions?” Dennis asked.

“Is it too late to not go on stage?” said Marsah Dunlap a Louisville freshman.

“I will shoot you,” said Dennis, a Nashville junior.

“I was impressed with the turnout,” said Lisa Greenfield, the coordinator. “It was a nice number of people.”

The Nashville sophomore said the name was changed from pageant to gala because it was more than a pageant. “This is truly an exhibition of talent, pride and culture.”

Miss Black Western began in 1971 when blacks started feeling the need for a separate pageant. “We live in a culturally deprived society,” Greenfield said. “This is an opportunity to come together socially and lift up some of our own.”

Draped in trenchcoats, the contestants finally came out of the chaotic dressing room for their first appearance, moving thei hips like dancers in a music video.

While waiting for the judges to tabulate, Greenfield and Dunlap danced around the dressing room “I’m in rare form tonight,” Dunlap said. “My feet hurt.”

“Good luck, everybody,” Dennis said as the contestants walked out on stage to find out who the winner was.

Four Western faculty members and the Rev. Ron Whitlock, a former president of the National Association for the Advancement of Colored People, judged.

DaChonne Rucker, a Nashville freshman, won the title. “Please don’t ask me what it’s like to be Miss Black Western.”

She said she’d already been asked a million times.