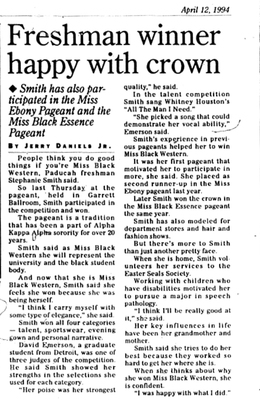 So last Thursday at the pageant, held in Garrett Ballroom, Smith participated in the competition and won.

The pageant is a tradition that has been a part of Alpha Kappa Alpha sorority for over 20 years.

Smith said as Miss Black Western she will represent the university and black student body.

And now that she is Miss Black Western, Smith said she feels she won because she was being herself.

"I think I carry myself with some type of elegance," she said.

David Emerson, a graduate student from Detroit, was one of the three judges of the competition. He said Smith showed her strengths in the selections she used for each category.

"Her poise was her strongest quality," he said.

In the talent competition Smith sang Whitney Houston's All the Man I Need.

"She picked a song that could demonstrate her vocal ability," Emerson said.

It was her first pageant that motivated her to participate in more, she said. She placed as second runner-up in the Miss Ebony pageant last year.

Smith has also modeled for department stores and hair and fashion shows.

But there's more to Smith than just another pretty face.

When she is home, Smith volunteers her services to the Easter Seals Society.

Working with children who have disabilities motivated her to pursue a major in speech pathology.

Her key influences in life have been her grandmother and mother.

Smith said she tries to do her best because they worked so hard to get her where she is.

When she thinks about why she won Miss Black Western, she is confident.

"I was happy with what I did."