Cartoonist Is Out of Control 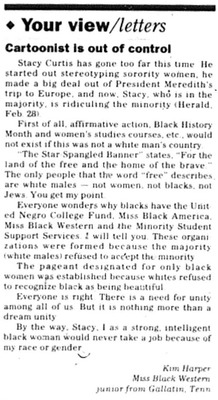 Letter to the editor of the College Heights Herald regarding Herald cartoonist Stacy Curtis:

Stacy Curtis has gone too far this time. He started out stereotyping sorority women, he made a big deal out of President Meredith's trip to Europe, and now, Stacy, who is in the majority, is ridiculing the minority (Herald, Feb. 28).

First of all, affirmative action, Black History Month and women's studies courses, etc., would not exist if this was not a white man's country.

"The Star Spangled Banner" states, "For the land of the free and the home of the brave." The only people that the word "free" describes are white males - not women, not blacks, not Jews. You get my point.

Everyone wonders why blacks have the United Negro College Fund, Miss Black America, Miss Black Western and the Minority Student Support Services. I will tell you. These organizations were formed because the majority (white males) refused to accept the minority.

The pageant designated for only black women was established because whites refused to recognize black as being beautiful.

Everyone is right. There is a need for unity among all of us. But it is nothing more than a dream unity.

By the way, Stacy, I as a strong, intelligent black woman would never take a job because of my race or gender.