Gala Focusing on a Black Role Model, Not Just Beauty 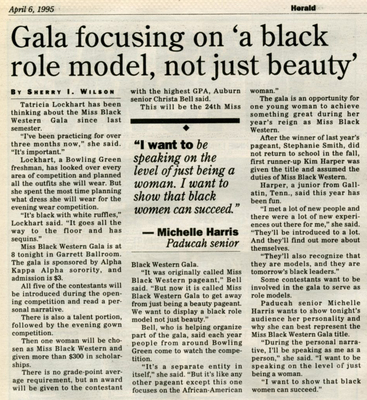 Tatricia Lockhart has been thinking about the Miss Black Western Gala since last semester.

"I've been practicing for over three months now," she said. "It's important."

Lockhart, a Bowling Green freshman, has looked over every area of competition and planned all the outfits she will wear. But she spent the most time planning what dress she will wear for the evening wear competition.

"It's black with white ruffles," Lockhart said. "It goes all the way to the floor and has sequins."

Miss Black Western Gala is at 8 tonight in Garrett Ballroom. The gala is sponsored by Alpha Kappa Alpha sorority, and admission is $3.

All five of the contestants will be introduced during the opening competition and read a personal narrative.

There is also a talent portion, followed by the evening gown competition.

Then one woman will be chosen as Miss Black Western and given more than $300 in scholarships.

There is no grade-point average requirements, but an award will be given to the contestant with the highest GPA, Auburn senior Christa Bell said.

This will be the 24th Miss Black Western Gala.

Bell, who is helping organize part of the gala, said each year people from around Bowling Green come to watch the competition.

"It's a separate entity in itself," she said. "But it's like any other pageant except this one focuses on the African-American woman."

The gala is an opportunity for one young woman to achieve something great during her year's reign as Miss Black Western.

After the winner of last year's pageant, Stephanie Smith, did not return to school in the fall, first runner-up Kim Harper was given the title and assumed the duties of Miss Black Western.

Harper, a junior from Gallatin, Tenn., said this year has been fun.

"I met a lot of new people and there were a lot of new experiences out there for me," she said. "They'll be introduced to a lot. And they'll find out more about themselves.

"They'll also recognize that they are models, and they are tomorrow's black leaders."

Some contestants want to be involved in the gala to serve as role models.

Paducah senior Michelle Harris wants to show tonight's audience her personality and why she can best represent the Miss Black Western Gala title.

"During the personal narrative, I'll be speaking as me as a person," she said. "I want to be speaking on the level of just being a woman.

"I want to show that black women can succeed."