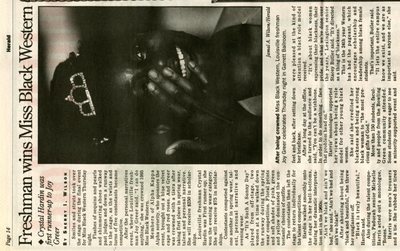 Smiles and struts took over the stage during the final event for Miss Black Western Thursday night.

Flashes of sequins and pearls and shimmering shoes walked past judges and down a runway to the stage as the twists and turns of five contestants became competitive.

After the personal narratives event, where Louisville freshman Joy Greer said, "I can do anything," she was crowned 1995 Miss Black Western.

Members of Alpha Kappa Alpha sorority who sponsors the event, brought out a blue velvet cape and red roses. And Greer was crowned with a tiara after taking first place in spring wear, talent and personal narrative. She will receive $250 in scholarships.

Louisville freshman Crystal Hardin was First runner-up; she won the evening wear category. She will receive $75 in scholarships.

Contestants competed against one another in spring wear, talent, personal narrative and evening wear.

As "It's Such a Sunny Day" played from off-stage, two women at a time walked down the runway during the spring wear competition. Floral prints and soft shades of pink, green and yellow dominated the contestants' choices of outfits.

The contestants then left the stage to return individually for the talent competition. Hardin walked smoothly onto the stage in her bell-bottoms during her dramatic interpretation set in the 1960s.

After shouting about being "black and beautiful," she threw her sunglasses off.

Harris wore men's trousers and a tie. She rubber her tired feet and back, after setting down her briefcase.

After a long day at the office, she turned to the audience and said, "You can't be a wishbone in order to do something face that problem head on."

Harris' monologue supported her views about being a role model for other young black women.

She said she credited her blackness and being a strong black woman to the "most precious gifts of God."

More than 150 students, faculty and people from the Bowling Green community attended. Some students were eager to see a minority supported event and were pleased at the kind of attention a black role model received.

"It's about black women expressing their blackness, their pride, and what we've done over the years," Lexington senior Stacey Butler said. "It's directed as a thing of 'blackness'."

This is the 24th year Western has had the pageant, which encourages scholarship and leadership among black female students.

"It lets the entire campus know we exist, and we are as important as anyone else," she said.