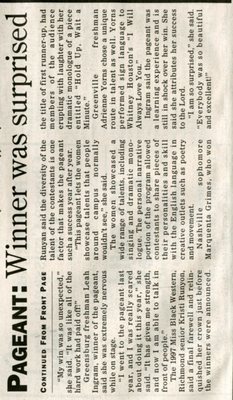 Second part of article published in the College Heights Herald.

"My win was so unexpected," she said: "It was like all of the hard work had paid off!"

Greensburg freshman Leah Ingram, winner of the pageant said she was extremely nervous while on stage.

"I went to the pageant last year, and I was really scared about doing it this year," she said. "It has given me strength, and now I am able to talk in front of people."

The 1997 Miss Black Western, Richmond senior Kirsti Runyon, said a final farewell and relinquished her crown just before the winners were announced. Runyan said the diversity of the talent of the contestants is one factor that makes the pageant such a success year after year.

"This pageant lets the women showcase talents that people around campus normally wouldn't see," she said.

The women showcased a wide range of talents, including singing and dramatic monologue. The personal narrative portion of the program allowed contestants to share pieces of their personalities and skill with the English language in creative outlets such as poetry and movement.

Nashville sophomore Marquenta Grimes, who won the title of first runner up had members of the audience erupting with laughter with her dramatic monologue of a piece entitled "Hold Up, Wait a Minute."

Ingram said the pageant was a learning experience and is still in shock over her win. She said she attributes her success to the Lord.

"I am so surprised," she said. "Everybody was so beautiful and excellent!"