Long Hours Pay Off at Pageant 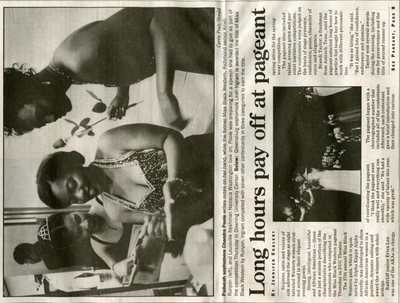 Sequins, satin and voice of silk adorned the stage as eight talented Western women strutted around in their elegant evening gowns.

Strong, intelligent, beautiful and African American - these are just a minute portion of the characteristics describing the contestants who competed in the Miss Black Western pageant Thursday in DUC Theatre.

The 27th annual Miss Black Western gala, which is sponsored by Alpha Kappa Alpha sorority, was developed to show African American women in a positive, dynamic setting and award the winners with scholarships.

Radcliff junior Erica Lee was one of the AKAs in charge of coordinating the pageant.

"I think the pageant went really well and everything ran smoothly," she said. "We had a wide variety of talent this year, which was great."

The pageant began with a choreographed number that included all of the contestants. Afterward, each contestant gave a brief introduction and then changed into various spring attire for the spring wear competition.

The pageant also included talent, evening gown and personal narrative competitions. The contestants were judged on the basis of stage presence, confidence, poise, character of voice and elegance.

Brandi Taylor, a freshman from Antioch, Tenn., said the pageant entailed long hours of practice but taught her how to work with different personalities.

"It was so tiring," she said. "But I gained lots of confidence, endurance and stamina."

Taylor won several awards during the evening, including one for perseverance and the title of second runner up.