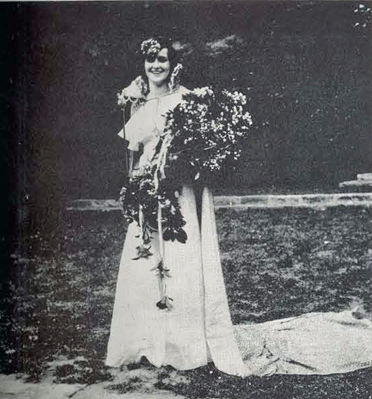 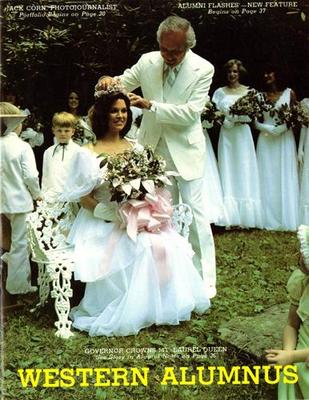 The procession began slowly: first the princesses, who were a group of local high school girls. Then, from the trees behind the audience came the queen candidates, 22 in all, each representing a Kentucky college. The excitement of the day had built up to that final moment – the final girl in line would be the new queen.

Last to emerge from the background of greenery was Miss Mona Wortham, 21-year-old daughter of Mr. and Mrs. J.R. Wortham of Leitchfield, Ky. With a kiss from the governor and a crown of laurel blossoms, Western’s Mountain Laurel Festival candidate was chosen queen – the first in 19 years.

The coronation was held May 27 at Pineville to celebrate the blooming of the mountain laurel. Miss Wrotham said the pageant was “really something! I was crying. My mom was crying. Everybody was crying!” But, the tears were those of happiness and excitement for the May 1978 graduate.

Miss Wortham sponsored by Kappa Delta sorority, was selected Feb. 16 to represent Western, picked by a panel of judges who met at Craig Alumni Center, following the luncheon in honor of 16 contestants from various campus organizations. The selection is sponsored by the Western Alumni Association.

At the Pineville pageant, the contestants did not know who their judges were, or when they were being judged. Miss Wortham said that the selection was based upon the candidate’s poise and personality throughout the weekend.

Miss Wortham said her family and friends helped her to remain poised and confident. She said, “I had all of their confidence behind me. My escort kept telling me that I looked beautiful. He was really my right-hand man!”

Miss Wortham graduated with a major in dental hygiene, and will begin work this summer in Owensboro. She was a member of the American Dental Hygienists Association, Phi Eta Sigma Honor Society, and Kappa Delta. Her interests include playing the piano and collecting wicker objects.

Her escort, Jack Winchester, also graduated from Western in May 1978 with a major in biology. Winchester , of Murray, Kentucky, will be attending dental school at the University of Louisville this fall.

Beauty pageants such as the Mountain Laurel Festival have been a part of Miss Wortham’s life since she was in high school. In 1973, she won the Cumberland County pageant and in 1974, she won the Hart County pageant and the Warren RECC pageant. After the Hart County contest, she entered the state competition and captured the title of Miss Kentucky County Fair 1975. Miss Wortham is also the 1976 Miss Lake Cumberland.

When asked if her career in pageants will now end, Miss Wortham quickly replied, “That’s it! This last pageant kind of dropped on me by surprise. I cunt it as an added blessing dropped on my life.”

Miss Wortham was picked by her sorority only a day or two before Western made its selection. “I didn’t have time to get nervous about it, and I really didn’t expect to win. I was a candidate from my dorm when I was a freshman and I didn’t get it then. I figured that would be my last chance,” she said.

But, Miss Wortham had another chance and so did Western! Alice Chumbly last won the title for Western in 1959, and Miss Wortham said that it was this lack of success in recent years that made her especially determined to win. “I was very proud to represent Western. I wanted to bring this recognition to our school.”