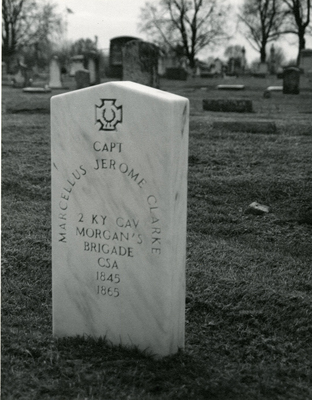 Grave of Captain Marcellus Jerome Clarke, Greenlawn & Shady Rest Cemetery in Franklin. It indicates that he was captain in the 2nd Kentucky Cavalry of Major General John Hunt Morgan's Brigade born 1845 [Aug. 25, 1844] and died 1865 [March 15]. He was best known by his alias Sue Mundy. In 1863 newspaper stories circulated that he was actually a woman disguised as a man. Clarke was captured in an ambush in 1865 and taken to Louisville where he was hanged.