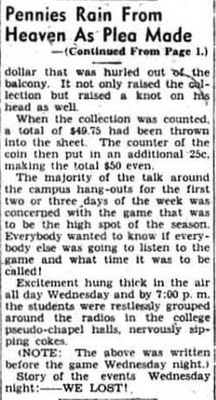 Completion of article regarding fundraising for broadcast of WKU - Duquesne game.

One of the cheer leaders was knocked in the head with a half-dollar that was hurled out of the balcony. It not only raised the collection but raised a knot on his head as well.

When the collection was counted, a total of $49.75 had been thrown into the sheet. The counted of the coin then put in an additional 25c, making the total $50 even.

The majority of the talk around the campus hang-outs for the first two or three days of the week was concerned with the game that was to be the high spot of the season. Everybody wanted to know if everybody else was going to listen to the game and what time it was to be called!

Excitement hunt think in the air all day Wednesday and by 7:00 p.m. the students were restlessly grouped around the radios in the college pseudo-chapel halls, nervously sipping cokes.

(NOTE:) The above was written before the game Wednesday night.)

Story of the events Wednesday night: - WE LOST!